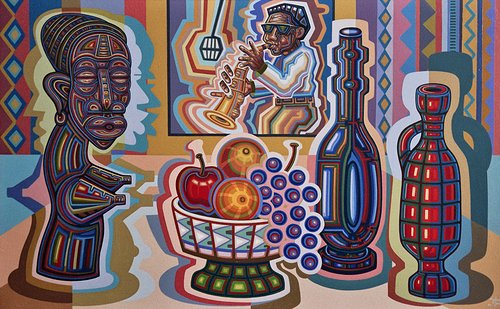 Melvin Clark is an artist currently living in East Stroudsburg Pennsylvania. Melvin was born 1944 in Detroit Michigan. He began art studies in the 1970's. Initially, Clark took advantage of the community based art centers that were spread around Detroit. Melvin's formal training took place at the prestigious "Center For Creative Studies"{now the"College For Creative Studies"}, located just accross the street from the "Detroit Institute of Arts". His exposure to major works of art in the D.I.A. by the Mexican Muralist, the Post Impressionist, the German Expressionist, the Master Craftmen of Africa, as well as his interest in the works of African-American Artist Charles White and John Biggers, helped inform and shape Melvin's mature style.

In 1986, Clark was awarded a fellowship to study at Robert Blackburn's famed "Printmaking Workshope" in New York City. The Avant Garde nature of the New York Art and Jazz scenes appealed to Melvin and his move there became permanent later that year. In 1988, he was appointed Artist-in-Residence for one year at the "Lower East Side Printshop",New York City, after receiving a New York Council on the Arts Grant.

During the late 1980's and 1990's, Clark exhibited extensively in the United States{Chicago,Boston,San Francisco,New York}and in Europe where the "Modern African Art Gallery" in Amsterdam represented him for many years. Clark often uses music as a motif for his creativity and became known for his paintings and prints featuring expressive and interpretive images of some of the giants of Jazz. Clark received commissions during the 1990's to produce featured designs for posters distributed by International Jazz/Blues Festivals in Great Britain, Denmark and the United States.Among other important commissioned works is his 1996 "Enchanted Dreams and Sunbird", a permanent mosiac tile Mural installed at New York's P. S. 152 in Brooklyn. Another major commission for Clark was the 1998 Mural Project For New Jersey Transit{Penn Station - Newark}. The Mural was entitled "New Spirit Ensemble" and payed homage to the rich Jazz history of Newark. His work received numerous honors in the 90's including the "Best of Show" award at the respected "Black Creativity" Exhibition held annually at Chicago's Museum of Science and Industry.

Melvin W. Clark's work is referenced in several scholarly and popular publications including The Art of Culture: Evolution of Visual Arts by African American Artist, The Last Fifty Years{Chicago, 2003} and Walls of Heritage, Walls of Pride: African American Murals{San Francisco, 2003}. A monograph on Clark was published in 1991 by The Modern African Art Gallery in Amsterdam. His work is featured and illustrated in the essay, "Last of the Beboppers" by Edsel Reid, published in Vol. 15, NO 1 of the International Review of African American Art publised by Hampton University.

Since 2000, Clark's work has been featured in numerous one-man and group exhibitions at venues including The National Black Fine Arts Show in New York, the Embrace Art Fair in Atlanta and at Lusenhop Fine Art Chicago{now based in Detroit}.In 2009, the South Shore Arts Gallery, the largest non-profit visual arts venue in Northwest Indiana, mounted a widely praised career retrospective of Melvin Clarks paintings and prints.To this day, Clark continues to produce and exhibit works from his studio in the Pocono Mountain area of Pennsylvania.